Home > Blog > Life In The UK Test Questions And Answers

In this article we will provide you with 10 Life in the UK test questions and answers, to give you an idea of what the test involves. If you want to get ready for a long and successful life in the United Kingdom, then this is the ultimate guide for you!

The Life in the UK test must be taken and passed by anyone who wishes to remain in the United Kingdom on indefinite leave or who wishes to apply for naturalisation. The test will assess a candidates knowledge and understanding of UK life so that they are suitable to become a citizen in England, Scotland Ireland or Wales.

In total there are only 24 questions in the Life in the UK test and the test-taker will have 45 minutes in which to complete it.  The official test has to be taken in English unless the person is wishing to reside on Wales or Scotland when it can, by request, be taken in Welsh Language or Scottish Gaelic.

Sitting the Life in the UK test

The Life in the UK test is taken on a computer and it will look similar to the following: 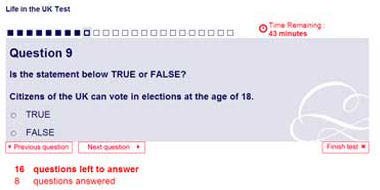 You will see from the above image that there are dark boxes across the top. These boxes signify the number of test questions you have to take; there are 24 in total. Providing you can navigate with a mouse you can move to any question you wish.

The Life in the UK official test consists of a number of questions that are taken from different subject headings. Here are just a few examples to give you an idea of the areas in which you need to study:

You can book your Life in the United Kingdom test, with the official test body here: UK Border Agency Life in the UK Test.

Let us now take a look at some sample Life in the United Kingdom questions and answers, to help you prepare.

Question 1. What are the national regions of the UK? (choose 1 answer)

Question 2. How many national regions are there within the United Kingdom? (choose 1 answer)

Answer – B. There are 4 national regions in the UK: England, Northern Ireland, Scotland and Wales.

Question 4. What proportion of the population of Scotland come from ethnic minority groups? (choose 1 answer)

Answer – D. There are few large cities in Scotland, and high unemployment in many areas, so fewer people from ethnic minority groups choose to settle here.

Question 5. What proportion of the population of Wales come from ethnic minority groups? (choose 1 answer)

Answer – C. People settling in the UK often go to cities, where there are more job opportunities.

Question 6.  Which one of these two statements is correct? (choose 1 answer)

Question 7. In the FA cup final, what does FA stand for? (choose 1 answer)

Question 8. Is this statement TRUE or FALSE? Most people in the UK have no interest in sport (choose 1 answer)

Question 9. What sport is played at the FA Cup final? (choose 1 answer)

Check out the guide, by clicking on the image below! 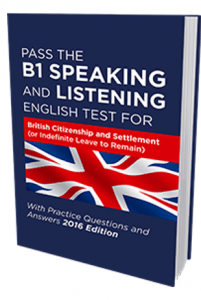