The UK police force is broken down into two delineations: Police and Metropolitan Police. Metropolitan police officers work in places like London and while the job duties are not different the pay can be more in cities such as London due to the higher crime rate. There are 14 different police service ranks.

Each police officer is provided with a warrant number. This number is given at the date someone joins the force and is separate than the epaulette ranking and number one receives as a constable and sergeant. police are provided with a divisional number.

The police service ranks differ based on the amount of “power” they have to serve and protect, where higher ranks are going to be in charge of groups of officers versus a constable ranking that is at the bottom of the ranking structure. All police are duty bound to prevent crime, reduce fear, and protect property, individuals and technology. Police are also going to help identify criminals and ensure proper prosecution. 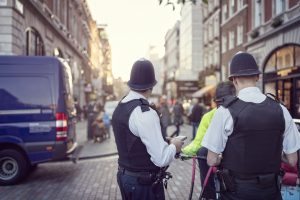 Combating organised crime, terrorism and issues with public order along with working with communities, schools, social workers, criminal justice, health trusts and much more are part of police duties. Housing authorities, businesses, education for communities, diffusing dangerous situations, issuing penalties, helping with road and traffic accidents are a few more areas that police help with. It is also possible that a police officer may be asked to deal with lost or found property, conduct initial investigations (as a constable), gather evidence, take statements, and conduct arrests. All police will need to comply with the laws.

Metropolitan rankings do not vary from the above until after the Chief Superintendent. Rather than assistant constables up to Chief Constable, metropolitan areas have the following in the chain of command. 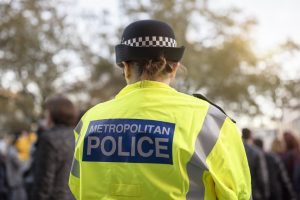