The new GCSE grading system might be troublesome for those wishing to apply for places at university in the coming years, as universities are undecided on what counts as a passing grade. Let’s take a look at the new GCSE grades 2017, and how this may or may not have an impact on your university choices in the future.

In short, there shouldn’t be a major issue. However, there are a few things to consider if you are currently studying for GCSEs.

As of 2017, the GCSE grading structure is changing. Instead of the alphabetical system of A*-G, GCSEs will be changing from levels 9-1. 9 will be the highest grade, whilst 1 will be the lowest. Here’s a comparison chart of how the new grades equate to the older ones: 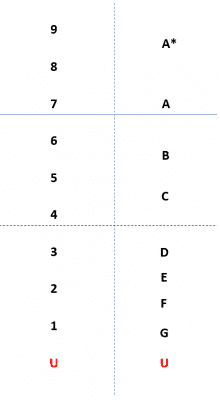 There are a lot of sensible reasons for this change, such as being able to create a new grade that is harder to achieve than the A*. However, it has the potential to cause confusion.

As you can see, the old GCSE ‘C’ grade is the equivalent to two different grades – 4 and 5. 5 appears to be the equivalent of a high C, whilst 4 is a lower to mid C grade. Since a lot of universities used the C grade as a benchmark for what constitutes a ‘good pass’, they now have to decide whether a 4 or a 5 is the new equivalent. Sadly, there is yet to be a consensus on the matter.

For example, Manchester University has deemed that the new ‘good pass’ grade is a level 4. However, University College London have set theirs at a level 5. This means that, depending on which university you apply to, you either will or will not reach the threshold purely due to how these institutions view the new grades.

When the new GCSE grading system was introduced, Education Secretary Justine Greening stated that a level 4 would be the equivalent to a ‘standard pass’. In contrast, the grade 5 is a ‘strong pass’. Now that the terminology has changed, there’s a huge disparity between universities who are trying to decide on a new C grade equivalent.

For example, Leeds and Liverpool universities have followed Manchester in setting a level 4 as the new C grade. In contrast, King’s College London has chosen level 5 to represent the new ‘good pass’ grade.

To make matters more complicated, the London School of Economics has set level 5s as its requirement, but previously requested a B grade. Either LSE have lowered their requirements, or they are suggesting that level 5 is the equivalent of a B grade.

If you’re sitting your GCSEs at the moment, there’s no need to panic. You won’t be applying to universities for another year. In this time, universities across the country should level out in some way. However, universities have the right to decide for themselves on which they consider to be the benchmark. Take extra care when applying for a place at university in the future, just in case they still have different standards by that time.

Students who are already applying to universities at the moment need not worry. If you’ve completed your GCSEs prior to 2017, these changes and confusion won’t affect you in any way.

If you’re currently taking your GCSEs and would like expert tips and guidance, check out our range of GCSE study guides.