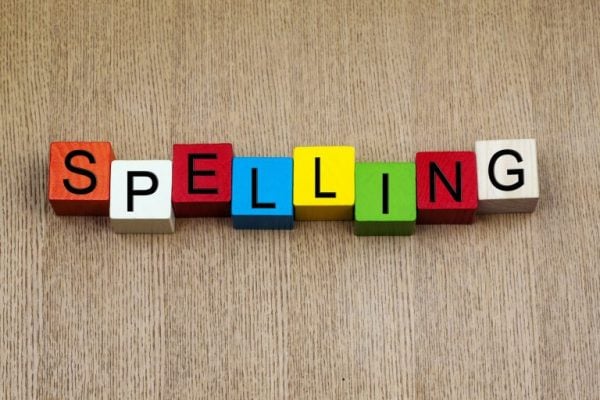 The spelling section of the QTS Literacy Skills Test can be incredibly difficult if you do not prepare adequately. Since you do not know what type of spellings will appear, it is important to take the time to learn all of the more difficult conventions which occur in the English language.

Difficult Words and Conventions in the QTS Literacy Skills Test

In the QTS Literacy Skills Test, you will be expected to spell words you’d likely face in the world of teaching. You probably won’t need to be able to spell “deontology” or “larynx” very often, and so you won’t be required to spell words of that kind. However, there are still difficult words that you may face in the literacy skills test. In this section, we will cover the tougher kinds of spelling.

Before continuing, take a look at the words above and try to spell them. Some of them are words which contain a double consonant, whilst others contain prefixes and suffixes. We will cover both of these spelling conventions since they can be rather tricky, and will likely appear in the QTS Literacy Skills Test.

These are collections of letters which are assigned to the beginning and end of certain words. A prefix comes before the word, while a suffix comes at the end of it. Prefixes and suffixes are added onto pre-existing words to change their tense or usage.

A prefix is added to the beginning of a root word in order to create a new word.

Prefixes generally act in a straight-forward manner. Words with an added prefix will always remain unchanged in spelling. For example, When “appropriate” becomes “inappropriate,” the prefix in- is added but the spelling remains unchanged. 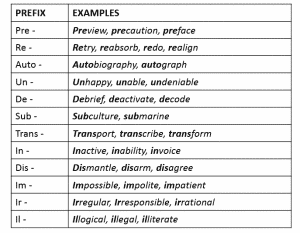 A suffix is added to the end of a root word in order to create a new word.

In many cases, words don’t undergo major changes when adding a suffix, but other words have to be spelt slightly differently. For example, when “appropriate” becomes “appropriately,” the only change is the addition of the suffix –ly. However, when “exaggerate” becomes “exaggerating,” the suffix –ing is added but the “e” at the end of the word is removed. 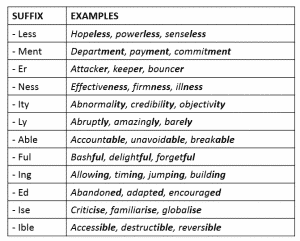 Generally speaking, when a word ends with an “e” and can be suffixed with –ing, the “e” is removed when the suffix is added. “Separate” becomes “separating,” “facilitate” becomes “facilitating” and “equate” becomes “equating.”

When adding –ly to a word that ends with an “e,” the “e” usually remains in place. For example, “approximate” becomes “approximately.”

However, if the word usually ends with –le, then adding the suffix –ly removes the “e.” So, “applicable” becomes “applicably.”

Also bear in mind that many words can have a prefix as well as a suffix such as “unquestionably” or “unimportantly.”

Unfortunately, you will probably come across double consonants in the spelling section of the QTS Literacy Skills Test since they are quite common in everyday language. Keep a list of words that contain double consonants and practice spelling them. Use this list to get started:

As you can see, there aren’t any clear patterns which form to make memorable rules. In particular, be careful for words which use multiple sets of double consonants, such as “accommodate” and “embarrass.” In these cases, two sets of consonants are double, but other words do not follow this rule. Both “gorilla” and “dilemma” have a single pair of consonants which follows from a single consonant.

While most spellings are strictly correct or incorrect, there are some exceptions. In the spelling section of the QTS Literacy Skills Test, both “biased” and “biassed” are acceptable, as are both “focused” and “focussed.” Whatever spelling you choose, try to be consistent.

These are words which sound the same, but are spelt differently and have different meanings. If you are going to be sitting the audio version of the QTS Literacy Skills Test, homophones can be particularly tricky since hearing the word won’t necessarily point out the correct spelling. In order to answer questions which involve homophonic words, you will have to know what each of the variations means and then examine the sentence the word has been taken from. From there, you can figure out which spelling is appropriate.

The three sets of homophones which you need to pay the most attention to are:

These words are notorious for being confused, even amongst adults. It’s also possible that you will need to answer a question on them in the spelling section of the QTS Literacy Skills Test.

There – used to denote location, place or position.

“The train station can be found there.”

“There is a cat nearby.”

Their – used to denote ownership (usually a group of things’ ownership).

“Their shoes were muddy from cutting through the nearby field.”

“It was their responsibility to lock their computers when they were away.”

They’re – a contraction of “they are.”

“They” is a group of things, whilst “are” is used to denote what is currently the case for the group.

“The students don’t feel confident about the test, but they’re going to do just fine.”

To – used to denote motion or a change in condition.

“Things went from bad to worse.”

“There were two dogs hanging around outside.”

Too – used to denote excess. Can replace the word “also” or “as well.”

“There were too many people on the train.”

“It was later decided that James could come, too.”

Your – used to denote ownership.

“This is your room.”

“Your payment is overdue.”

These are just a few examples showing how these homophonic words are different from one another. When you come across these during reading, try and take apart the sentence that the word is in and figure out why it is spelt in that way. In the test, you should do the same. Read the entire sentence to understand what the word is being used to do, and then choose the correct spelling.

Be aware that there are other homophones too, such as:

The best way to learn this is by familiarising yourself with their meanings and usage in a sentence. This way, you will be able to tell which spelling is suitable given the sentence surrounding it.

On the surface, longer words appear to be the toughest part of spelling. After all, a longer word has more letters in it, and therefore more of a chance of getting them wrong. However, longer words can actually be quite easy to spell once you how to handle them.

The best way to approach a longer word is to dissect them into smaller chunks. This can be done by dividing a word into syllables:

By doing this, you can remember smaller groups of letters rather than one larger block. This may be particularly useful for remembering some words which contain double consonants. Try using this method on your list of difficult words or try it with the following:

This might be the most infamous convention in the English language due to its apparent concreteness, despite having plenty of exceptions.

Generally, the rule is considered to be “i before e, except after c.” However, there are a number of exceptions to this rule, such as:

This means that the rule has to be adjusted slightly to “i before e, except after c, if the sound is ee.” This means that if the word has an ‘ee’ sound (like how it sounds in the word “seek”) as well as a c before it, then the ei spelling must be used.

For example, the word “perceive” has an ee sound. It also has a c before the ee sound. Therefore, the spelling must be ei rather than ie.

With this amended rule, words such as “eight” and “forfeit” can be remembered with their correct spelling in mind, while “perceive” and “receive” have an ei spelling due to the c.

Spelling can be incredibly tricky because a lot of the apparent rules do not universally apply. This means that there are often no tricks to learn spellings; you just have to learn them individually. However, by learning and recognising the types of words that people find most difficult, you will hopefully be able to focus on your own weaknesses when it comes to spelling. By doing this, you will be in a much stronger position for passing the QTS Literacy Skills test.