What are Ambulance Exemptions and Non-Exemptions?

There are a lot of ambulance regulations and emergency services driving regulations that emergency response drivers must follow. However, there are also ambulance exemptions (or emergency services driving exemptions) and non-exemptions. These are changes to usual driving laws which allow emergency response vehicles to get to an incident to treat patients, or to take them to a location where they can be treated (i.e. a hospital). An exemption is a relaxation of driving law when the situation permits it. For example, all drivers on the road are obligated by law to adhere to the speed limit. However, an emergency response driver can be exempt from this law in an emergency so long as they have a justification for it. The key here is that there must be justification for exceeding the speed limit. So, if the road was completely clear, and it was relatively safe to exceed the speed limit in the case of an emergency, then the driver could be considered exempt from the driving law of obeying the speed limit.

Essentially, an exemption from driving laws can usually be claimed by the driver if the driving laws would prevent them from doing their job properly on that specific occasion. So, if the speed limit was going to stop an ambulance from arriving at a scene in time to save someone’s life, then the driver would be exempt from obeying the speed limit.

While there are exemptions to a number of driving laws, this does not mean that you can do whatever you want on the road as an emergency response driver. Not only are there non-exemptions (things you absolutely must not do and cannot be claimed as exemptions), there are also limitations on exemptions such as exceeding the speed limit. Part of an emergency response driver’s skillset is knowing the ambulance exemptions and non-exemptions, whilst also possessing the judgement of when to use them. Let’s take a look at the actions which can be legally exempted. 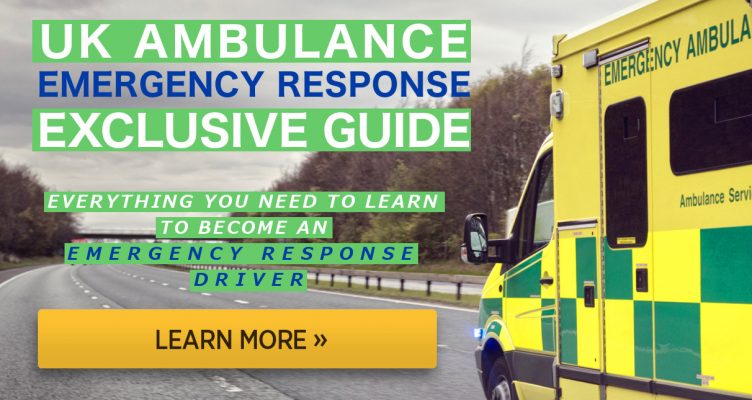 For each of the following exemptions, we will include:
• The name of the manoeuvre/action.
• Considerations to keep in mind when taking the action.
• A reference to relevant legal documentation outlining the law, particularly surrounding ambulance legislation UK.

The following legal exemptions apply when the vehicle has stopped to deal with a patient. They (largely) relax parking restrictions to that an emergency response vehicle can be as close to the patient as possible.

Stopping on a Clearway

• Vehicles may stop on a clearway, provided that members of the response team have protective equipment for leaving the vehicle on a road with flowing traffic.
• s.5 Road Traffic Regulation Act 1984.

Parking in the ‘zigzag’ area on a Pedestrian Crossing

• Vehicles may park on the zigzag area at a pedestrian crossing in order to keep the vehicle closer to a patient.
• However, doing so may increase the risk to nearby pedestrians as they might not have a clear view of the crossing.
• Regulation 27(3)(c) Traffic Signs Regulations & General Directions 2002.

Parking in areas with Double Yellow, White, or Red Lines

• Emergency vehicles may park on double yellow, white, or red lines.
• Drivers should consider where the safest place to park the vehicle is in these zones to keep risk to a minimum.
• Drivers should ensure to leave the area as soon as possible.
• Regulation 26(5)(b) Traffic Signs Regulations & General Directions 2002.

Parking on a Footway, Verge, or Central Reservation

• Vehicles may park on footways, verges, and central reservations if this allows aid to reach a patient more easily.
• Drivers need to consider how this may obstruct pedestrians and put them at risk, as well as potential damage to footpaths and the vehicle.
• s.5 Road Traffic Regulation Act 1984 & s16(d) Motorways Traffic England and Wales Regulations 1981, By-laws.

Legal Exemptions when Engaged in Emergencies – Ambulance Exemptions and Non-Exemptions

The following exemptions only apply when tending to an emergency. This means that, if the situation is not an emergency, these exemptions are not permissible.

Exceeding the Speed Limit – How Fast can an Ambulance Legally Drive?

• The speed limit may be exceeded if it is safe to, such as if the road is relatively clear of other vehicles and pedestrians.
• Drivers must keep a cool head to avoid ‘red mist’.
• Other drivers and road users may not behave in predictable ways.
• A higher speed means that the driver has less time to process information about the road. If there are more hazards on the road, speed needs to be kept lower.
• Rain, snow, and ice will reduce control of the vehicle, especially at high speeds. This can be lethal when not considered properly.
• s.87(1)(2) Road Traffic Regulation Act 1984 (speed) (Amended 2006).

Treating Traffic Lights and Zebra Crossings as a Give Way

• Emergency vehicles are equipped with audible warning tools such as sirens. However, it might not always be appropriate to use them, particularly during the night.
• Drivers must consider whether audible warnings are necessary. In some cases, they are absolutely necessary so that they can inform other drivers and pedestrians – especially on dark roads.
• Regulation 99 Road Vehicles (Construction and Use) Regulations 1986.

Passing on the Incorrect Side of Keep Left/Right Signs

• Ambulances may pass on the incorrect sides of areas marked with “keep left” and “keep right” signs.
• This would be an appropriate course of action if obeying the sign would prevent the vehicle from reaching an emergency destination in time.
• This course of action may only be taken if doing so will not cause damage to other vehicles.
• In some cases, the driver may need to justify that there was no alternative but to take this course of action.
• Audible and visual warnings must be used extensively to warn pedestrians and other drivers.
• Speed must be reduced as the emergency vehicle may be faced with oncoming traffic and/or pedestrians.
• Regulation 15(2) The Traffic Signs Regulations & General Directions 2002.

• Emergency response drivers may need to take actions and manoeuvres which would usually be illegal on a motorway.
• Traffic on a motorway travels at a much higher speed on a motorway than any other kind of road. Higher speeds = less time for drivers to think and react. This means that emergency response drivers need to be extremely careful when making manoeuvres, since other drivers might not be able to react properly.
• Visual warnings and personal protection must be used.
• The hard shoulder may be used to pass traffic.
• The noise of the siren may be inaudible due to the sound of the road and other vehicles.
• Motorway Traffic (England and Wales) Regulations 1982.

Use of Bus Lanes During Operating Hours

• In emergencies, emergency response drivers may use bus lanes – even if they’re in operation by buses.
• This might bring the driver closer to pedestrians.
• During non-operation times, there may be cars parked in the bus lane.
• The bus lane and the street may be shared.
• Drivers should avoid using contraflow bus lanes since this will bring them against oncoming traffic.
• By-Laws.

Driving into a Pedestrian Precinct

• In some emergency situations, it may be necessary to enter a pedestrian precinct in an ambulance.
• Drivers must ensure that their speed is checked before entering the precinct. This is because there may be pedestrians walking nearby.
• Sirens may not always be suitable, consider alternatives such as the horn.
• Pedestrians must have precedence over the ambulance.
• The ambulance may be blocked by other vehicles such as delivery vehicles.
• Traffic Signs Regulations & General Directions 2002.
• By-Laws.

Non-exemptions are breaches of road laws which are not justifiable under any circumstances. In other words, emergency response drivers must never do any of the following when driving an ambulance, whether in an emergency or not.

You should now have a good idea about what the ambulance exemptions and non-exemptions on the road are, as well as the ambulance rules of the road. There’s a significant number of ambulance driving exemptions. However, it’s worth remembering that these should not be taken unless necessary. Emergency response drivers will need to be able to justify their actions.

Interested in becoming an emergency response driver? Check out How to Become an Emergency Response Driver.