If you are interested in becoming a magistrate, then you want to hear cases in the courts, but also volunteer for the privilege. Magistrates are usually one of three people to hear a case, with one of the three acting as the chair person. Magistrates listen to a legal adviser regarding the case and then ensure proper procedure is followed. Criminal cases are always started in magistrate court; however, the most serious crimes are indictable and heard in the Crown Court. It is up to the magistrate to determine if a defendant needs to be kept in custody, let out under certain conditions, and hear certain crimes like minor assaults, theft, and motor related offences. Family cases require a specially trained magistrate given the involvement of children these cases may have.

Entering into a Magistrate Position

To begin in a career as a magistrate there is no educational requirement. Full training for the role occurs at the time of being selected as a volunteer and legal advisers in the court system help ensure the magistrate understands the laws that deal with the specific case being heard. It is possible to volunteer as a magistrate with a legal education already in existence; however, as stated it is not necessary as training is a part of the application process and acceptance. 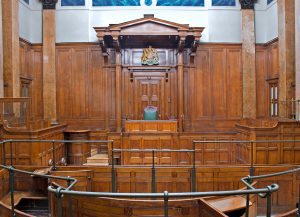 Age Any person over the age of 18 and under the age of 65 can apply to become a magistrate. Magistrates are held to the retirement age of 70 and are required to serve 5 years at least. Health Requirements There are no big health requirements and no medical exam will need to be taken. For a magistrate position a person does need to hear clearly whether with an aid or without one. This is particularly important to this role as evidence and legal details are heard by the candidate and then a decision has to be made. Another health requirement is the ability to sit and have a good concentration sometimes for a full day in order to resolve the case. This position does not exclude pre-existing conditions, illnesses, or poor health as long as it will not interfere with the case being heard and a decision clearly made from the information provided. Personality Requirements As with any career or job, there are qualities in candidates that are looked for. These qualities help ensure a fair case, listening ability, and ability to handle the job required of the person. It is helpful if the candidate can show the following:

Other qualities that help include understanding evidence, documents and an ability to communicate clearly and concisely. It helps to have logical thinking to listen to both sides of the legal arguments and arrive at a fair resolution. Convictions Typically there are certain areas in a person’s life that could hold them back from becoming a magistrate such as convictions in which a person applying was found guilty of a serious crime or numerous minor offences. While not illegal if a person is banned from operating an automobile in the last 5 to 10 years this can also negate acceptance. Bankruptcy is another issue that can hold a candidate back from becoming a magistrate despite it being completely legal to have to declare bankruptcy. It is simply a matter of financial worry in the court of law in which someone declaring bankruptcy might be more susceptible to a bribe on a case.     Conflicts of Interest Issues As being a magistrate is on a volunteer basis if a person’s current career is that of a police officer or something related to law it is considered a conflict of interest. If the job is no longer held by the person it is not considered an issue. Magistrate Duties Magistrates have to provide 13 full days or 26 half days in each calendar year to their duties. An employer will need to be aware of such requirements and allow for this reasonable time off. Pay and Allowances Magistrates are not paid; however, employers may allow time off from work with pay to fulfil these duties such as holiday pay. Allowances such as subsistence or travel can be provided.