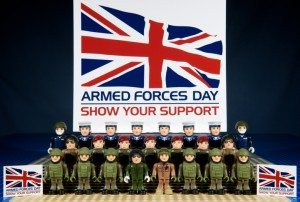 Between them, the British Army, Royal Navy, Royal Air Force and Royal Marines offer a wide range of apprenticeship schemes for candidates. Once you have applied, and gone through the selection process, you’ll be sent to either Harrogate or Winchester, to undertake your training. If you are undertaking a combat based career, you will be placed at Harrogate. Specialist and technical roles are trained at Winchester. Whatever your choice, you will have the option to take an apprenticeship. There are over 50 different options available.

When taking an apprenticeship, your aim is to train in an area which will be similar or closely linked with a future job. Therefore, your army apprenticeship will directly relate with the role that you are hoping to perform in the service. The qualifications that you will receive from an army apprenticeship are also recognised by employers outside of the armed forces. There are two different levels available:

How much do army apprenticeships pay? And what does it cost me?
Army apprentices receive higher than the average UK apprentice wage, and will not have the debts normally accumulated from University to worry about either.

Will I enjoy my apprenticeship?
The army is constantly developing new and exciting apprenticeship programmes to fit in with existing roles within the sector, so there is a high chance you will find something you are interested in. If you are someone with a desire to protect your country, and learn new and interesting skills along the way, this could be a great option for you. Below we have listed the four key areas in which you can work, and the roles available within each.

Examples of some of the British Army apprenticeships you can apply for include:

In the UK, the four biggest army jobs providers are:

As a member of the Royal Navy you would work on both sea and land to protect the interests of the United Kingdom. You will have the opportunity to work on ships, submarines, aircraft and naval stations. There are many specialist opportunities available within the navy, including:

-Aircrew and operation. Flying and controlling the Navy’s helicopters and aircraft, supporting air traffic control and maintaining aircraft and equipment.

-Engineering and mechanics. Maintaining weapons and equipment, ensuring ships and aircraft are fully functional and running.

In order to apply to the Navy, you must first fill in an application online. Following this, you will attend a two-day interview and assessment course. This will include various aptitude tests, fitness and medical checks, face to face interviews and personality questionnaires. If you are successful in this endeavour, you will begin your training.

The Royal Marines are a smaller subsection of the Navy. They are primarily a fighting force, open only to males, and operate on land, sea and in the air. There are many specialist roles available within the marines, including:

In order to apply for the Royal Marines, you must first obtain an application form from your local careers office. You’ll then be invited to take a recruitment test, whereby your skills in English, Maths and problem solving will be examined. If you are successful in this, you’ll be invited to take a medical and physical examination, and an interview.

This will be followed by a three-day assessment centre, where you will be tested physically, mentally and on your personality. You will have to complete various aptitude tests, as well as another interview. Finally, you must attend another two-day assessment course, where you will be tested physically and medically. Your aptitude will also be further examined. If you are successful in all this, you will begin your training.

As a member of the British Army, you would represent the UK in providing protective and humanitarian aid around the globe. You would also work to safeguard the UK, whether on the front line or behind the scenes.

There are many specialist roles available within the Army, such as:

-Combat. Working on the frontline with guns or armoured offensive vehicles to provide protective services to civilians.

-Engineering. Working to solve a range of different army based problems. You would be required to fix everything from faulty equipment or plumbing issues, to complicated and dangerous weapons and intelligence systems.

-Logistics. Responsibility for resources and equipment, ensuring all products and resources are in optimum condition for use.

-Healthcare. Healthcare workers are responsible for the medical wellbeing of the army’s officers, soldiers and even their animals.

In order to sign up, you must first apply online. Once you have completed your online application form, you will be sent a link enquiring about your general health. Assuming this meets the required standard, you will then be invited to attend an interview with a careers advisor. The careers advisor will establish which role is the most suitable for you. You’ll then be invited to attend an assessment centre. Here you will undertake mental, physical and aptitude based tests. If you are successful in this endeavor, you will begin your training.

As a member of the Royal Air Force (RAF) you would be responsible for representing the UK in the air. You would work to police the skies, aid, protect and provide humanitarian services to overseas victims, and provide emergency services to mountain and coastal areas. You can either work as a trade, or as non-commissioned aircrew. Trades work on the ground, to support aircrew via technical means. Non-commissioned aircrew work alongside pilots as weapon systems operators. As you progress within the field, you may get the opportunity to become an officer, or pilot.

There are also many specialist roles available within the RAF, including:

-Air operations. Working to maintain and support the safety of pilots already in the air, through services such as air traffic control.

-Engineering. Working with specialist aviation equipment to ensure the safety of pilots and the safe return of planes.

-Intelligence.  Working to maintain the security and privacy of air telecommunications, as well as analysing and interpreting intelligence information.
In order to work within the RAF, you’ll first need to fill in an application form. Following this, you will be invited to attend a four day selection centre where you will be tested mentally, physically, on your aptitude and intelligence and will undergo various medical checks. If you are successful, you will then begin a 30 week training programme.

To find out more about the different army jobs and apprenticeship schemes available, you can visit the army apprenticeships website.