Looking for the very latest Police Officer Competency Based Interview Questions? Then look no further!

In this training article, Richard McMunn from renowned police recruitment experts How2Become, provides you with the very latest, up-to-date tips, advice and hints on how to prepare for the police officer assessment centre video.

Hi, everybody. My name’s Richard McMunn from the career guidance company how2become.com and in this video, I’m gonna give you the very latest tips and advice on how to prepare effectively for the all-new police officer competency-based interview.

Now, things are changing within the selection process to become a police officer so for those people who are going to competency based interview 2018 onwards, this will apply. So make sure you’ve got a pen and some paper and take notes of the tips and hints that I’m going to give you and then at some point during this video, I’m gonna tell you where you can get further information to help you be fully prepared for the new police officer interviews.

So the interview, same as before, will last for approximately 20 minutes in duration. You’re going to get asked four initial questions and you’ve got five minutes to answer each one. Now, five minutes doesn’t seem like a long time but it is so you should make sure before you go to the interview you have your responses prepared, okay. Now the interview questions are sample ones that I’m going to give you now.

I’m not saying these are gonna be the exact ones. That would be wrong of me to do that but based on my own experiences of working in the Emergency Services recruitment and also being involved in developing core competencies for these kind of roles, these are the kind of questions that I recommend you prepare for in addition to the ones that you’ll prepare for following your own research and the information that I’m gonna give you at the end of the interview.

So when you go into the interview, make sure you dress smart. You may be invited to give a handshake. If you do, make sure it’s a firm handshake. And look the interviewer in the eye, obviously not aggressively but politely. When you shake their hand, give a good solid first impression. So you enter the interview room, make sure you look smart, you sit up straight in the interview chair and these questions that you’re gonna get asked are based on your past experiences. And that’s a key important note to mention at the early stage of this video and write this down. You have to come up with sample responses based on your past experiences, okay. So you can’t make them up. They actually have to be specific examples that you’ve been in.

So if I was to say to you, and this isn’t a question by the way, but if I said:

“Give us an example of when you’ve worked as part of a team?”

Okay, you’d have to give a specific situation that you’ve been in the past where you’ve worked with other people as part of a team to come up with a successful solution, a successful outcome and that’s the important part. And I’ll also tell you during this video how to structure your responses. So it has to be a specific one.

What you don’t want to do and many people do this when responding, is they say, “Well, if I was in a situation when I was working as part of a team, this is what I would do.” That’s no good, okay. You will get very few marks for that kind of response. Make sure that it’s specific, something that you’ve been in before.

Q: How did you demonstrate fairness in that particular situation?

This is because you’re gonna be assessed against all of the competencies and values for becoming a police officer and you can find out what they are in a separate video that I’ve created for you.

So how did you demonstrate fairness in that particular situation. So the assessor, the interviewer, might be looking to probe further to get that information out from you.

Q. What did you learn from this experience?

So if you tell them about a situation where you helped someone to overcome a difficult situation, they might say, “What did you learn from that experience?” Okay, so be prepared for probing questions.

Q. Would you do anything differently if the same situation arose again?

That’s an example of a probing question. That’s a difficult one because you might think, “Well, no, I wouldn’t do anything different because I think I handled it well.” If you were going to say that, then you should say to the interviewer, “I assessed my performance following the situation. I looked into it and I felt that I’d handled it well. However, I am always looking to improve and if something did occur where I thought, well I could do that better, then I would be open to that.” Because then you’re open to change, you’re open to, you know, to developing yourself as an individual and that’s important in the role of a police officer.

Q. How did the other person react to what you said or what you did?

Q. How did they react and how did you feel about that?

So be prepared for potentially lots of probing questions. And again, when I tell you where you can get additional information, we will help you prepare fully for those.

Q. Describe a situation where you have demonstrated empathy towards an individual?

Okay, so remember that the police core competencies are based on values so have you ever demonstrated empathy? And don’t just come up with a fictitious scenario. You have to have actually been in that situation.

Q. Describe a situation where you’ve demonstrated forward thinking, when you’ve been creative or forward-thinking?

I would suggest in a work-related situation where you’ve come up with an innovative solution to a problem or you’ve been creative, okay. You’ve taken the lead, you’ve thought about how can we resolve this difficult situation, and you’ve been forward-thinking in your approach. That’s really important in the role of a police officer.

Next question, describe a situation when you’ve come up with a creative solution to a problem. Very similar to the previous one. And the next one, describe a situation when you’ve helped somebody to overcome a difficult situation or a challenging problem. Okay, so do you know anyone in a work situation or outside of work where you’ve helped them overcome a difficult situation or a challenging problem? What did you do? What did you say and also, what was the outcome? And whilst on that, and I mentioned this at the beginning, there’s a certain technique that I recommend you use when you’re preparing for your responses to the interview questions and that’s the:

So, write this down.

First of all, explain what the situation was that you were involved in. Then explain what had to be done and that’s called the task. Okay, so situation and then the task.

What did you have to do or what did others have to do in order to achieve a successful outcome? The third part of the STAR technique is action. What action specifically did you take and what action did other people take? And then finally, R for result. What was the result? And my advice is to make sure that the result, the outcome, is a positive one, it’s a successful one.

So based on the initial situation, so if the question was describe a situation where you’ve helped or supported either an individual or a group, you would explain the situation, the task, what did you have to do to get to that successful outcome, what action did you take, and then what was the result. And the probing question might be would you do anything differently next time. How did the group or the individual react? Did you have a debrief at the end? Would you do anything differently?

So, that’s a very brief introduction to the new police officer competency based interview questions. If you want to learn more and accelerate your learning further and be fully prepared, click the link directly below the video and it’ll take you through to a page where you can get an excellent resource. And this resource has been helping people, lots recently to successfully pass the selection process and we’re confident that it will help you prepare fully for the police officer interview.

Get INSTANT ACCESS to our Police Officer Interview Questions and Answers training videos! 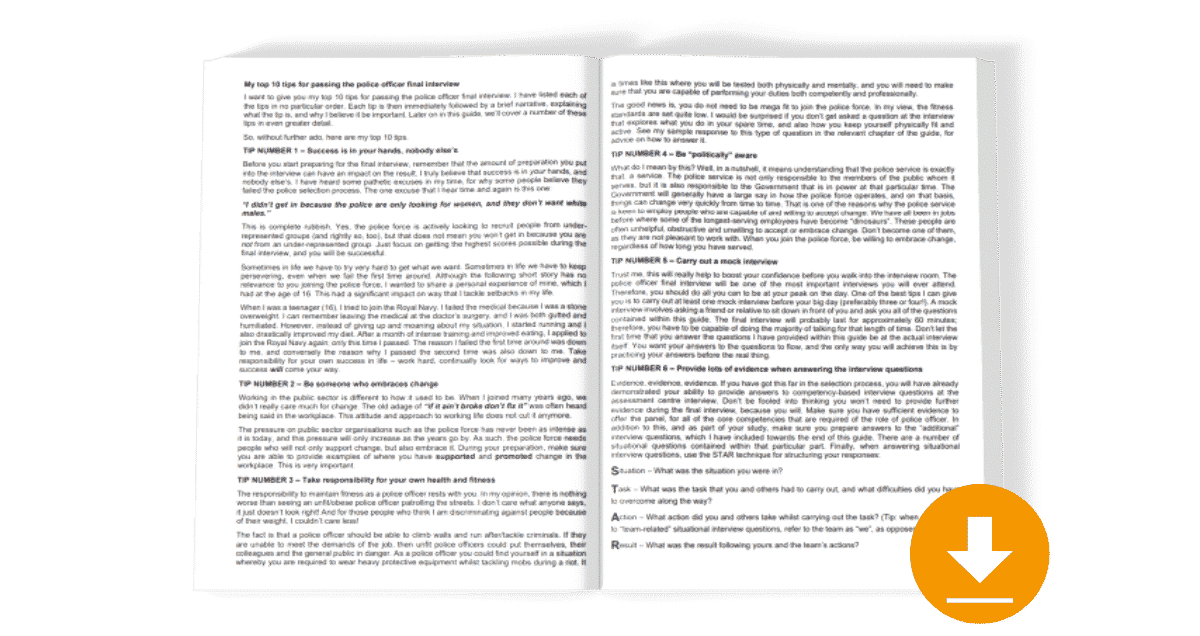